London/Brussels; 27 April 2020: Kashmir Women’s Movement (KWM) and Organisation of Kashmir Coalition (OKC) organised a COVID-19 KASHMIR WOMEN’S CONFERENCE via video link in which included politicians, lawyers and human rights defenders, academics and jurists. Among others, who took part in the conference included:

The Conference comprehensively analysed the situation of Kashmiri women and girls both under occupation and the Covid-19 Pandemic. It is highlighted that Kashmiri women and girls are exposed to poverty, powerlessness, ill health, physical and psychological trauma and they are vulnerable in becoming infected with Covid-19. The Conference expressed its anguish at the lives of the de facto widows who are wretched enough and the half-widows are in worse conditions but all of them continue to struggle against discrimination, marginalisation, abuse and violence from the State. The Conference unanimously adopted the following JOINT STATEMENT:

We organised this Conference at a time when the world finds itself in a new global crisis due to the Covid-19 Pandemic. All other crises and pressing issues are overshadowed by this health emergency. Therefore, it is disturbing that the Indian authorities should be using this pandemic as a cover to continue its brutal attacks on Kashmiri Society to silence Kashmiri voices by eradicating Kashmiri leadership and destroying the fabric of civil society. Women and girls are bearing the brunt of this unlawful occupation in spite of the UN Secretary General’s call for a cease fire as the world seeks to contain the spread of the Pandemic, India continues its attacks against the innocent people of Kashmir (in breach of International Law).

This conference was convened by women as the women of Kashmir need international solidarity in order to protect their basic rights. Women of Kashmir have grown up knowing too much, too fast about conflict, trauma, bombs and violence including rape and sexual torture. Whilst international actors call for equality many of the women and girls are left behind without a voice. Thousands of Kashmiri women have been widowed in this conflict while over 20,000 are wives of the forcibly disappeared who we call half-widows. In recent months many Kashmiri women have been detained in prison and several have been killed. The poverty, powerless, ill health, physical and psychological trauma exposes them to great danger so they become infected with Covid-19. Whilst the lives of the de facto widows are wretched enough, those of the half-widows are even worse but all of them continue struggle against societal discrimination, poverty, marginalisation, abuse and violence. Not only have these women been subjected to violence by police but also by the occupation forces. The half widows suffer, as they have no closure to their grief as they continue to experience identity crisis from the uncertainty of whether they are married or not. This struggle reveals a cultural gap in Kashmir where the needs of women and the issue of their equality continue to go unrecognised. They have no rights to social security, pensions, inheritance, and land nor can they re-marry. They face harassment and violence from police when they seek information. India is signatory to the International Convention for the Protection of All Persons from Enforced Disappearance (ICCPED). Therefore, India is under international obligation to trace the disappeared. It must fulfill its obligations under international law. Article 1 of ICCPED places a non-derogable prohibition against enforced disappearances and applies even in a state of war and public emergency. India cannot invoke such grounds as a justification for these actions.

Women of Kashmir and their sympathisers around the world shall undertake all possible measures to maintain the Jammu and Kashmir conflict at the highest level of the international agenda.

The world must respond to the unconstitutional and unilateral course of action the government of India set in motion in Indian Occupied Jammu & Kashmir (IOJK) since 5th August 2019. The people of IOJK have been living under a severe lockdown regimen making life if not unbearable pressure on their lives at least extremely difficult. All the Kashmiri key leaders are arrested and continue to be held in confinement to-date. All of us are indeed most concerned about their wellbeing, health and safety, especially as a result of the constraints and risks posed by the Covid-19 Pandemic.

During the ongoing eight and half month long military siege, annexation of and lockdown in IOJK imposed, since 5th August 2019, nearly half a dozen women leaders including Asiya Andrabi, Fehmeeda Sofi and Naheeda Nasreen have been arrested and detained at Tihar jail, New Delhi.

We demand their immediate release along with Saima Iqra and Insha Tariq, both 23 years old, who were arrested in IAJK, Hina Bashir Beig, 39 years old, arrested along with her husband at Jamia Nagar, New Dehli, Masrat Zahra, a 26 year old award-winning photojournalist from Srinagar arrested and accused of “uploading anti-national posts [on Facebook] with criminal intentions to induce the youth” and booked under the Indian Penal Code. Masrat’s work as a freelance photojournalist has appeared previously in international media such as The Washington Post, Al-Jazeera and in Indian media such as Quint, and Caravan, among others.

The European Union (EU) is based on a strong commitment to promoting and protecting human rights, democracy and the rule of law worldwide. Human Rights are at the heart of EU relations with other countries and regions. We urge the European Union via its external action service (EAS) that any trade talks with India should be mindful that human rights and trade are two sides of the same coin.  We further urge that the EU actively uses the UN Guiding Principles on Business and Human Rights as a substantive normative legal framework which obliges transnational companies and/or other types of business enterprises to comply under international law with a view to foster accountability and transparency of all businesses thus upholding compliance while safeguarding Human Rights.

It is greatly concerning that India attempts to keep prisoners in confinement and bring about a planned demographic change as the occupying power should be thwarted and discussed in any upcoming trade talks. This amounts to ethnic cleansing and is prohibited under international and humanitarian law.

We implore the UK Government and members of both the Houses of Parliament to use all available means, diplomatic and economic, to ensure a resolution of this long pending conflict. Also, to engage the Commonwealth in negotiation to ensure India complies with human rights and humanitarian law.

We plead with CEDAW and the UN Human Rights Council to address the extreme discrimination of Kashmiri women and girls especially in the context of Covid-19.

We urge the Organization of Islamic Co-Operation (OIC) to take a more prominent lead in promoting  greater engagement in order to protect all the human rights of the people of Jammu and Kashmir and help in resolving the conflict.

We urge the Indian government to allow international organisations to examine the prison conditions under which the detained Kashmiri leaders and other political prisoners are held, to commence dialogue with a view to achieve the release of all who are incarcerated simply because they demand the right to self-determination

We urge the Indian government to restore complete Internet services including 4G particularly during this pandemic to enable all health practitioners to access and download latest medical guidelines, conduct online medical video consultation and conferencing to share best practice, and help access and share vital information about how best to treat those affected by the Covid-19 virus.

We urge India, Pakistan and Jammu and Kashmir to begin direct tri-partite negotiations at a neutral destination, for example Geneva, within the next 12 months with a complete commitment (together with adequate representation of women on the delegation in compliance of the UN Security Council Resolution 1325) to resolve the Jammu and Kashmir issue pursuant to the United Nations resolutions.

This Joint Statement is adopted on Saturday 25 April 2020 at the conclusion of the Kashmir Women’s Movement – KWM (in association with Organisation of Kashmir Coalition – OKC) Conference held virtually.

KWM and OKC have expressed their deep gratitude to all the participants to have participated in the Covid-19 Kashmir Women’s Conference during this epidemic period standing in solidarity with the people of Jammu & Kashmir in these challenging times. 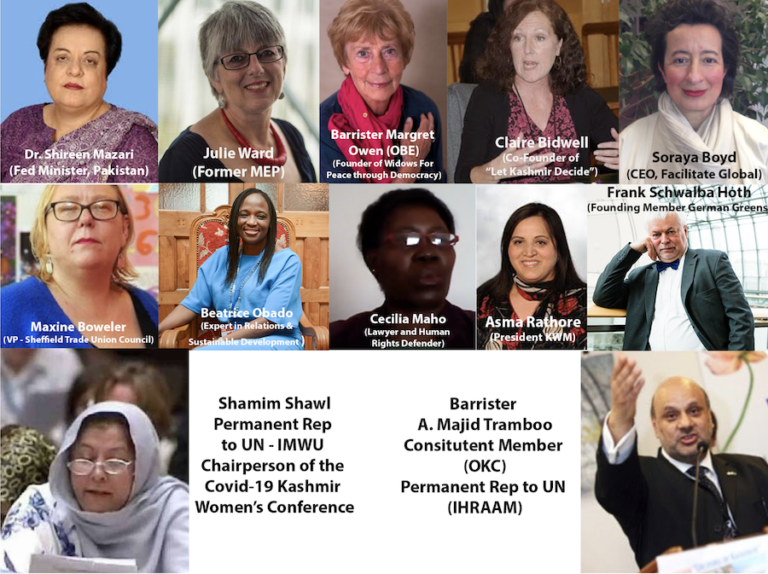