A BRIEF BACKGROUND TO THE JAMMU & KASHMIR CONFLICT

The people of Jammu and Kashmir’s right to self determination is recognised in the United Nations Security Council resolutions, which were first adopted in 1948 to address the solution and the hostilities stemming from the subsequent conflicts. 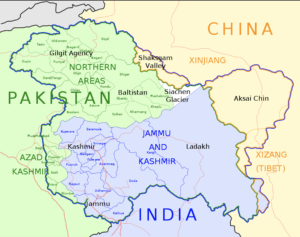 Both sides were called to give support and co-operation, cease fighting and provide supervision to its nationals, state troops, and forces. The agreed upon document was to create the proper conditions for setting up the administration of a fair and peaceful plebiscite. The Government of India was called upon to give full support to the administrator and staff to prevent any threat, coercion or intimidation, or appearance of intimidation, bribery, or other undue influence, and to announce this undertaking as a binding international obligation for all public authorities and the officials in the state of J&K. There was to be freedom of press, speech and assembly, freedom to travel, no victimisation, all political prisoners and citizens of J&K were to be released, and its citizens were to be allowed to lawfully enter and exit the state. The last Security Council resolution (SG 307) was adopted at its 1616th meeting on 21 December 1971, with calls for a political settlement and a cease-fire to the conflict with specific reference to the Geneva Convention of 1949.

The UN Security Council Resolutions are binding international obligations that give legal effect to the resolutions giving third party recognition to the people of J&K to determine their status through plebiscite and to create the conditions for its implementation. Both High Contracting Parties were dressed with full power and authority with the understanding that the international obligations arising from the solemn statements and agreements by the United Nations Security Council were binding. This placed the conflict of J&K on the international programme.

Sadly the J&K conflict has worsened over the years with catastrophic human rights violations.

The Indian government, which is controlled by the Bharatiya Janata Party (BJP – widely known as a Nationalist Party) has implemented its election manifesto pledge to abrogate Articles 35A and 370 of the Indian Constitution. This unconstitutional change (in contravention of the international law as the India-held Kashmir conflict is on the United Nations Security Council’s agenda), is to ensure the demographic change in the state of J&K by establishing settlements in the names of Sanik colony (to give land to ex-soldiers who served in India-administered Kashmir), West Pakistan Refugees colony (here India relives 1947 to offer land to fundamentalist Hindus) and Pandit colony (in the grab of Pandits giving land to additional Hindu fundamentalists). This demographic change is designed to install hundreds of thousands Hindutva fundamentalists in India-held Kashmir; also through the Reorganisation Act, passed in both the houses of the Indian Parliament, India has confiscated Ladakh from J&K and declared J&K as a union territory by unilateral unlawful annexation; this brazen violation of the Constitutional and International Law by India must be rejected.

The Indian government, since 5 August 2019, has announced closure of all educational institutions, evacuation of all tourists, complete prohibition on freedom of assembly and expression, imposition of Section 144 of the Indian Penal Code (no more than 4 people to stand at a public place), and complete shutdown of mobile and landline phones, internet services and social media. The J&K valley is under siege and cut off from the rest of the world.

Understandably, the crisis around the Covid-19 pandemic is overshadowing all other pressing issues worldwide. Nonetheless, the Indian authorities are using the pandemic, as a ‘double lockdown’, to silence Kashmiri voices by eradicating Kashmiri leadership and demoralising and destroying civil society. International media has reported that during the pandemic, there being increase in the Indian Armed Forces “Cordon and Search Operations” resulting in a range of human rights violations including physical intimidation and assault, invasion of privacy, arbitrary arrest and unlawful detention, extrajudicial killings (staging fake encounters), collective punishments and destructions of private properties. The principle target of this terror is youth, women and children and their families and properties.