London/Brussels; 07 May 2020: Kashmir Youth Assembly (KYA) and Organisation of Kashmir Coalition (OKC) organised a COVID-19 KASHMIR YOUTH CONFERENCE via video link in which included politicians, lawyers and human rights defenders, academics and jurists. Among others, who took part in the conference included:

We organised this conference at a time when we find the world combating Covid-19 Pandemic of unprecedented dimensions. This crisis situation is being shamelessly exploited by India. The youth of Indian Occupied Jammu and Kashmir (IOJK) is on the forefront of seeking the implementation of their right to self-determination pursuant to the United Nations Resolutions. The youth of IOJK has borne the brunt of the Indian terror.  Independent sources suggest that terror continues, during this Pandemic, against the Kashmiri youth.

In recent days the international news media has reported increase in the Indian military “cordon and search operations” resulting in a range of human rights violations including physical intimidation and assault, invasion of privacy, arbitrary arrest and unlawful detention, killings (staging fake encounters), collective punishments and destruction of private properties. The principle target of this terror is the youth, their families and properties.

Human Rights organisations report that 13000 young people between the ages of 9 and 16 have been arrested. Besides, being subjected to torture, inhuman and degrading treatment or punishment, they are also subjected to a process of indoctrination.

International media has reported that the Indian military forces have started cease fire violations on the Cease Fire Line (commonly known as Line of Control) by firing and shelling into Azad Jammu and Kashmir territory inflicting civilian casualties.

We demand that arbitrary and unlawful detention must cease forthwith and that all prisoners released including the release of Masrat Zahra, a 26 year old award-winning photo journalist accused of “uploading anti-national posts [on Facebook] with criminal intentions to induce the youth” and booked under the Indian Penal Code. Masrat’s work as a freelance photo journalist has appeared previously in international media such as The Washington Post, Al-Jazeera and in Indian media such as Quint, and Caravan, among others that include Gowhar Geelani and Peerzada Ashiq.

The cease fire violations must be brought to an end immediately.

The European Union (EU) is based on a strong commitment to promoting and protecting human rights, democracy and the rule of law worldwide. Human Rights are at the heart of EU relations with other countries and regions. We urge the European Union via its external action service (EAS) that any trade talks with India should be mindful that human rights and trade are two sides of the same coin. We further urge that the EU actively uses the UN Guiding Principles on Business and Human Rights as a substantive normative legal framework which obliges transnational companies and or other types of business enterprises to comply under international law with a view to foster accountability and transparency of all businesses thus upholding compliance while safeguarding Human Rights. It is greatly concerning that India attempts to keep prisoners in confinement (including the young Kashmiris) and bring about a planned demographic change, as the occupying power, this should be thwarted and discussed in any upcoming trade talks for this amounts to ethnic cleansing and that is prohibited under the international and humanitarian law.

We implore upon the UK Government and members of both the Houses of Parliament to use all available means, diplomatic and economic, to ensure a resolution of this long pending conflict together with ensuring the promotion and protection of Kashmiri youth’s human rights and engage the Commonwealth in the process.

We plead with UN Human Rights Council and the Office of the High Commissioner for Human Rights to protect the Kashmiri youth especially in the context of the Covid-19 Pandemic.

We urge the Organization of Islamic Co-operation (OIC) to address the gross human rights abuses against the children (boys and girls) and young people of IOJK.

We ask the Indian government to allow international organisations to examine the prison conditions under which the detained Kashmiri prisoners and young people are held, to commence dialogue with a view to achieve the release of all who are incarcerated simply because they demand the right to self-determination.

We ask the Indian government to restore complete Internet services including 4G particularly during this Pandemic to enable all health practitioners to access and download latest medical guidelines, conduct online medical video consultation and conferencing to share best practice, and help access and share vital information about how best to treat those affected by the Covid-19 Virus.

We urge India, Pakistan and Jammu and Kashmir to begin direct tri-partite negotiations at a neutral destination, for example, Geneva, within the next 12 months to resolve the Jammu and Kashmir issue pursuant to the United Nations Resolutions.

This Joint Statement is adopted on Wednesday 06 May 2020 at the conclusion of the Kashmir Youth Assembly – KYA (in association with Organisation of Kashmir Coalition – OKC) Conference held virtually.

KYA and OKC have expressed their deep gratitude to all the participants having  participated in the Covid-19 Kashmir Youth Conference during this epidemic period standing in solidarity with the youth and people of Jammu & Kashmir in these challenging times. 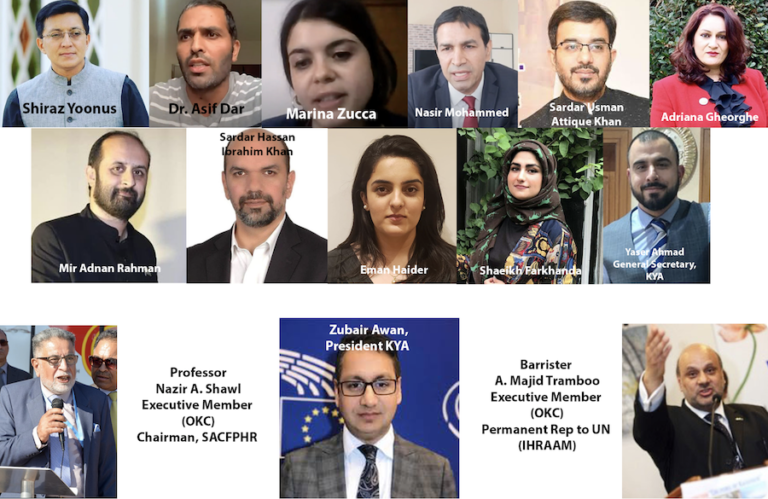