Brussels/London; 16 July 2020 – Professor Klaus Buchner, President of the All Parties Group on Kashmir – European Parliament (APGK) together with Organisation of Kashmir Coalition (OKC) held an informal farewell get together at the Brussels Press Club.   The Farewell event was attended by a good number of invited guests that included MEPs, Jurists, Scholars, Civil Society Members including Kashmiri and Pakistani diaspora.

All the speakers at the event paid rich tribute to Professor Buchner for his impeccable human rights and social sciences work that he carried out as a member of the European Parliament.

President Carles Puigdemont MEP categorised Professor Buchner as a person of high integrity dedicated to people’s human rights, justice and self-determination in which he himself believes firmly. He recalled his work on the Catalonians self-determination issue and the utmost attention Professor Buchner paid to the gross human rights violations resulting from the denial of plebiscite to the people of Jammu and Kashmir under the Indian Occupation. “Professor Buchner, in a very specific way you have been active in the case of Kashmir one of the most complex conflicts in our planet.  We both agree the tragic situation that Kashmir has been experiencing for decades and especially for the last 12 months is unsustainable and a long lasting solution must urgently be found.  This solution has to include self-determination/ Referendum for the Kashmiri population.  I am very aware that Professor Buchner has worked hard in the European Parliament over the last few years alongside Majid Tramboo to find a fair and lasting solution to the conflict.”

MEP Manuela Ripa who has taken over as the President of APGK, expressed her sadness over the grim human rights situation in Indian Held Kashmir and the denial of the referendum to the people of Jammu and Kashmir to determine their political future.  She expressed her astonishment on the Indian strong stance on the issue of Kashmiris right to self-determination.  MEP Ripa is committed to bring all the parties together on the Kashmir issue in order to seek the resolution of the conflict without any further bloodshed.  She added that she looked forward to work with OKC in this direction.

Jorgo Chatzimarkakis (former MEP) and Secretary General of Hydrogen Europe expressed his grave concern on the human rights situation in Indian Held Kashmir and believed that the European Parliament must actively place this human tragedy high on its agenda. Mr Chatzimarkakiz hoped that APGK shall continue with their crucial work on this taking the lead from Professor Buchner whom he described as a man of utter principles.

Barrister Majid Tramboo of OKC profoundly thanked Professor Buchner, for and on behalf of the people of Jammu and Kashmir, for his selfless work on their human rights, justice and self-determination issues. He remarked that although Professor Buchner is retiring as an MEP but the causes such as the Kashmir cause will ever so need him and that he would not stop working. Barrister Tramboo overwhelmed the audience by exhibiting the picture of the Grandfather who was gunned down by the Indian Paramilitary forces at a point-blank range, having dragged him out of his car, stretching his body on the road side with his grandson placed on his chest.  He was surprised that the Indian forces sickeningly took the pictures and made it viral as well on the pretext the grandfather being killed in crossfire.  Barrister Tramboo regretted that the India EU summit, that was held on the same day virtually, did not address the state terror situation in Indian Occupied Kashmir. He referred to the communiqué issued on the summit which talks of democracy, rule of law, justice and human rights and none of these exist in Kashmir.  He asked the European Union to place people’s human rights first as these are the founding principles of the EU and the trade considerations as secondary.  Barrister Tramboo urged on the EU to direct the EU delegation at New Delhi to visit the occupied territory and to forward the up to date report for the EU’s consideration and further action.

Among others, who spoke at the event include MEP Heidi Hautala, MEP Tilly Metz, MEP Jutta Paulus and Madame Vula Tsetsi, Secretary General of the Greens/EFA Group, recalled their association with Professor Buchner and commended his outstanding contribution to human justice and fairness particularly on the conflict of Jammu and Kashmir.

Professor Klaus Buchner in his farewell speech expressed his satisfaction on the work that he was able to achieve as a member of the Parliament.  He expressed his gratitude to his political group, fellow MEPs and all other comrades for giving him all the support in achieving his set goals.  Professor Buchner particularly referred to the work that he undertook on the issue of Kashmir as the President of APGK with the support of other members of APGK, he was able to put the Kashmiris Human Rights and their self-determination high on the agenda.  He described “Kashmir as a human tragedy which needs special attention in practical terms with EU Parliament playing  leading role.” Professor Buchner hopes that his successor MEP Manuela Ripa will work on this issue immensely and will achieve the desired results.

The event was moderated by Frank Schwalba-Hoth, (Former MEP and one of the founders of the German Green Party and one of the first members of Parliament in Germany and in the European Parliament) who throughout the event highlighted Professor Buchner’s achievements with particular reference to the work he accomplished on the Jammu and Kashmir conflict. He is confident that MEP Ripa shall continue with the legacy of Professor Buchner. 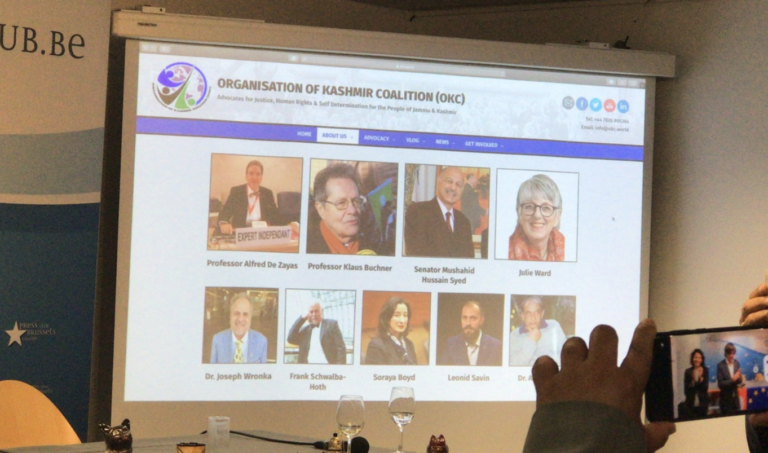 On the occasion, the APGK outgoing President and the incoming President together with other members launched the website of Organisation of Kashmir Coaltion – okc.world; the analysis of the website were provided by Mr Schwalba-Hoth including highlighting the Organisation of Kashmir Coalition’s Advisory Board (OKCAB) which includes personalities such as Alfred De Zayaz (First Independent Expert on the Promotion of a Democratic and Equitable International Order), Professor Klaus Buchner, former MEP Julie Ward, Senator Mushahid Hussain Syed,  Dr Joseph Wronka, Frank Schwalba-Hoth, Soraya Boyd, Leonid Savin and Dr Abdul Ahad.

Professor Buchner was also presented with a Kashmiri papier-mâché vase by Barrister Tramboo of OKC and other members of APGK as a mark of respect for his valuable work on the Kashmir conflict.