PEACE TALKS ON KASHMIR PARALLEL TO KOREA AND AFGHANISTAN PEACE TALKS: EXHIBITION – LOSING SIGHT IN KASHMIR AT THE BRITISH PARLIAMENT!

London; 14 July 2019: An exhibition entitled “Losing Sight in Kashmir” (on the human rights situation in India Held Kashmir) was organised by Lord Qurban Hussain and MP Kelvin Hopkins in association with Organisation of Kashmir Coalition (OKC) in the Houses of Parliament.

The Exhibition is in conformity with the observations made in the UN Human Rights Commissioners’ Reports of June 2018 and July 2019 and the Amnesty International`s Report on “Losing Sight in Kashmir.”

The Exhibition corroborated with the UN Secretary General`s support for the UN Human Rights chief`s call for an independent international investigation into the human rights situation in Kashmir, echoing that his action represents the voice of the UN on the issue.

The Exhibition is dedicated further to highlight that bloom of the dead eyes is due to a weapon, meant to be deployed for crowd control, that is responsible for blinding, killing and traumatizing Kashmiris.

Lord Qurban Hussain, in his opening remarks stated that the Exhibition highlights the plight of the people of occupied Kashmir. He added that those who are responsible for the gross atrocities should be brought to justice. “India and Pakistan should sit together and address this long lingering imbroglio”, Lord Hussain opined.

Mushahid Hussain Syed, Chairman Pakistan Senate Foreign Relations Committee, was the chief guest at the Exhibition and in his inaugural remarks he emphasised that all brutalities and the gross human right abuses perpetrated by the Indian administration in occupied Kashmir must be put to a stop, He argued that if peace talks are being held for Korea and Afghanistan why such peace talks for Kashmir are not brought on the international agenda, Senator Mushahid Hussain Syed further elaborated that Kashmir is a consensus matter for all Pakistanis and that Pakistan is committed to ensure the Kashmiris right to self-determination is redeemed without any further delay. 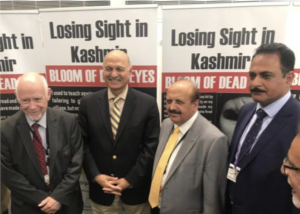 MP Kelvin Hopkins, the co-host of the Exhibition, welcoming the chief guest asked for a plebiscite as promised to the people of Kashmir who must have freedom to choose their political future according to their choice and freewill.

Mahboob Bhatti, Chairman Borough Council of High Wycombe, opined that the pictures authenticity displayed in the Exhibition is an indictment for the so-called largest democracy ofthe world and this necessitates the international intervention.

Raja M Aslam, Councillor Borough Council of Luton, believed that the profile of Kashmir, given the magnitude of gross human rights abuses in Indian Held Kashmir and the denial of promised plebiscite, needs to be substantially improved within the British politique.

International as watchdog to highlight the atrocities in different conflict situations. She referred to the plight of widows and half widows who are living life of trauma and psychosomatic disorders in the occupied territory.

Zubair Awan, Chairman Kashmir Youth Assembly and Executive Member of OKC, elaborated on the role of diaspora youth and his mission to accomplish it.

Barrister Abdul Majid Tramboo, Director and Permanent Representative to the United Nations of International Human Rights Association of American Minorities (IHRAAM) and Chairman of International Commission of Human Rights (ICHR) and Executive Member of OKC, asked the members of the parliament (House of Commons and House of Lords) to acknowledge the centrality of the Kashmir conflict in its regional context, He further articulated that bloom of the dead eyes is symptomatic expression of Indian iron fisted policy however, whatever Indian atrocities the Kashmiris right to self- determination is key to any solution.

Professor Nazir Ahmed Shawl, Chairman South Asia Centre for Peace and Human Rights (SACFPHR) and Executive Member of OKC, appealed the international community to ask India to allow a fact-finding mission to occupied Kashmir as suggested in the UN Reports. He also stressed that resolving of Kashmir conflict is crucial for regional peace and security and that peace in Afghanistan is linked to peace in Kashmir. 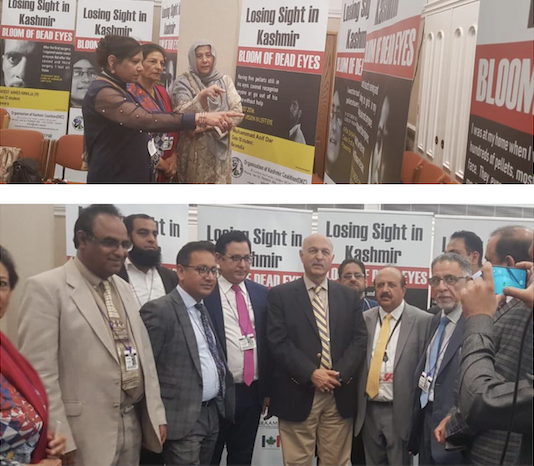