Born In Munich, he grew up in the German state of Bavaria, studied physics in Munich and Edinburgh, received his PhD from the Max Planck Institute for Physics (MPP) – and had the incredible chance to cross during his academic and professional career; three Nobel prize laureates in physics (Werner Heisenberg, Peter Higgs and Hideki Yukava) and one laureate of the Alternative Nobel Prize (Hans-Peter Dürr). His professional career started at the Kyoto National University in Japan, followed by the Chandigarh University (CU) in Punjab in India – and ended (after 33 years) at the Technische Universität München (TUM). Those academic years were honoured by awards in Poland (Gold medal award, University Wroclaw) and Italy (Accademia Peloritana dei Pericolanti, Messina). He is married, has four children and seven grandchildren. 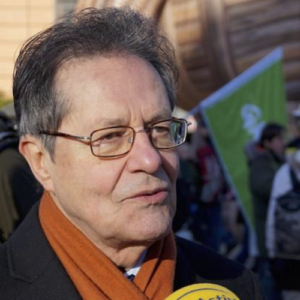 From the very beginning of his academic life, he was aware that the work of a scientist is linked to ones responsibility for the society and the whole world surrounding us. Therefore, he was active in the catholic church and with Amnesty International on human rights. Confronted with pollution in his neighbourhood, he discovered that he had to engage himself in politics – and he joined 1983 one of the newly created green parties in Germany: the ÖDP (Ökologisch-Demokratische Partei) – a centrist ecological and social party, especially strong in Bavaria. After 20 years of membership, he was elected President and in 2014 elected as the first ÖDP Member of the European Parliament. His activities in Brussels and Strasbourg focussed especially (in alphabetical order) at: animal protection, biological agriculture, cellular radiation, CETA, Dual Use goods, Egypt, energy storage, Iran, Kashmir, Korea, MERCOSUR, Middle East, political refugees, research projects, Sahara, surveillance technology, Turkey and trade negotiations.

Considering that nothing is eternal, he had arranged with his party that he would hand-over at a certain moment to someone of the younger generation – since summer 2020, Manuela Ripa has taken his seat in the European Parliament. Nevertheless, he will continue his political activities – especially on mobile radiation, surveillance technology, Kashmir and the Green Deal.