Alfred M. de Zayas studied history and law at Harvard, where he obtained his J.D. in 1970. He practiced corporate law with the New York law firm Simpson Thacher and Bartlett and is a retired member of the New York and Florida Bar. He obtained a doctorate in history from the University of Göttingen in Germany in 1977. 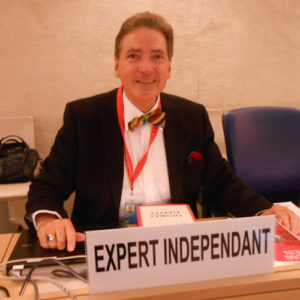 From 1981 to 2003 he was a senior lawyer with the Division of Human Rights/ Centre for Human Rights/ Office of the UN High Commissioner for Human Rights, Secretary of the UN Human Rights Committee, and Chief of the Petitions Department. In 2009 de Zayas was a member of the UN workshop that drafted a report on the human right to peace, which was subsequently discussed and further elaborated by the Advisory Committee of the Human
Rights Council, and led to the pertinent General Assembly resolution.

From May 2012 to April 2018 he served as the first Independent Expert on the Promotion of a Democratic and Equitable International Order and produced 14 reports to the Human Rights Council and UN General Assembly. He served as a consultant to the Office of the High Commissioner for Human Rights on the issue of self-determination and mercenaries. De Zayas is an expert for civil and political rights and has published nine books on a variety of legal and historical issues, including “United Nations Human Rights Committee Case Law” (together with Jakob Tth. Möller, N.P. Engel 2009), and has been co-author and co-editor of numerous other books, including “International Human Rights Monitoring Mechanisms” (together with Gudmundur Alfredsson and Bertrand Ramcharan).

His scholarly articles in the Max Planck Encyclopedia of Public International Law, Oxford Encyclopedia of Human Rights and Macmillan Encyclopedia of Genocide, encompass the prohibition of aggression, universal jurisdiction, the right to the homeland, mass population transfers, minority rights, refugee law, repatriation, legal aspects of the Spanish Civil War, indefinite detention, Guantáanamo, the Marshall Plan, the Office of the UN High Commissioner for Human Rights and the right to peace. He is fluent in six languages and has published a book of Rilke translations with commentary (“Larenopfer”, Red Hen Press 2008) and is now completing the translation of Hermann Hesse’s “Das Lied des Lebens”

From 2002-2006 he was Secretary-General, from 2006-2010 and again from 2013 to 2017 President of PEN International, Centre Suisse romand. He is member of several advisory boards, including of the International Society of Human Rights (Frankfurt a.M.), Zentrum gegen Vertreibungen (Berlin), the International Human Rights Association of American Minorities (Canada) and of the conseil scientifique of the Académie International de droit constitutionnel (Tunis).

He has received several awards, most recently the “Educators Award 2011” of Canadians for Genocide Education.