Opening the Roundtable, Barrister A. Majid Tramboo (Chairman International Commission for Human Rights – UN Permanent Representative – IHRAAM) expressed deep anger and anguish at the inhuman and degrading treatment or punishment of the people of Jammu and Kashmir by the Indian Occupying Forces and the Hindutva Nationalists in general, and sickening gangrape and beastly murder of 8 year old child Asifa Bano in particular.

Launching the campaign ‘Asifa Innocence Ravaged’, Barrister Tramboo narrated the horrid ordeal of Asifa at the hands of Hindu extremists, announcing that a procedural complaint will be filed with the relevant mandates of the UN Human Rights Council, and a comprehensive report to the UN High Commissioner for Human Rights, followed by European Union, the Commonwealth and the Organisation of Islamic Cooperation.

Addressing the Roundtable, Professor Nazir A. Shawl (Chairman, South Asia Centre for Peace and Human Rights) was equally disturbed with the horrific gang-rape and murder of Asifa. He said that it is beyond one’s imagination to understand the torture and agony with which this child had gone through at the hands of Hindutva extremists. He declared that no stone will be left unturned to raise the horrendous human rights violations and the Asifa tragedy at every international forum. 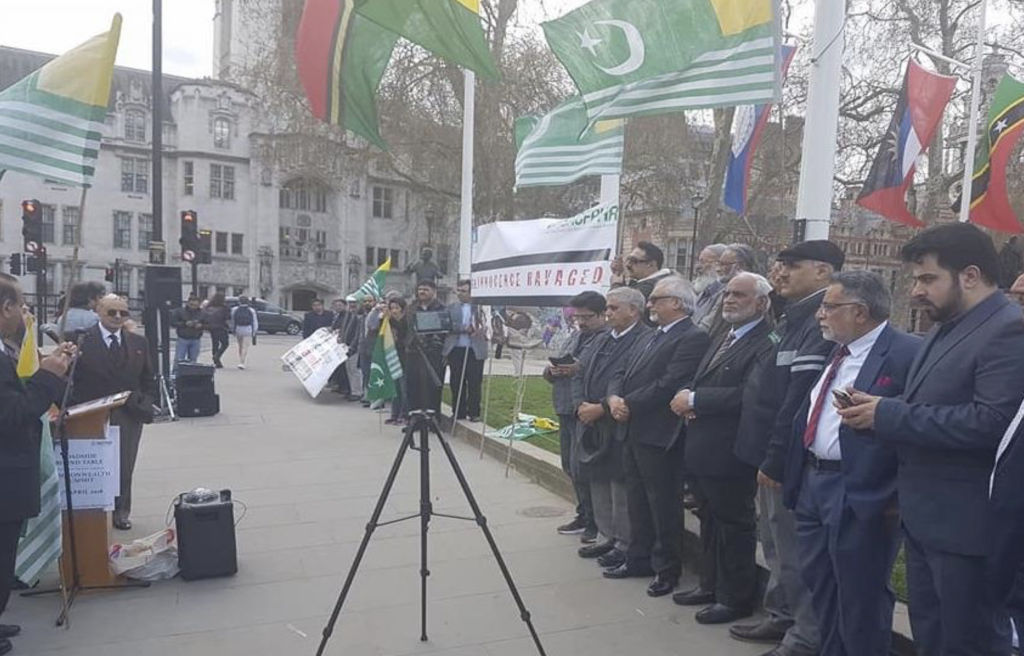 Syed Ali Shah Geelani [(Chairman All Parties Hurriyet Conference (G)], addressing the Roundtable, detailed the current climate in Kashmir under the Modi rule, slamming the disproportionate force used by Indian Forces at the behest of a radical and extremist BJP government. He emphasised the need for dialogue to commence, which should lay down the foundations for the cessation of gross human rights violations and to deliver Kashmir according to the aspirations of the people of Jammu and Kashmir. He further added that the tragedy of Asifa cannot, and should not ignored, reminding everyone that her innocence was ravaged by Indian terrorists.

Muhammad Yasin Malik (Chairman Jammu Kashmir Liberation Front), described the inhumane nature of the Indian brutality in Kashmir, emphasising upon the British Government and the Commonwealth to resolve the Kashmir dispute by giving the people their right to self determination. He underlined the desperate need to highlight the case of Asifa at every level, to bring justice to her family and the community.

Mirwaiz Umar Farooq [(Chairman All Parties Hurriyet Conference (M)], expressed his satisfaction to the Kashmiri diaspora leadership for organising regular events highlighting the ongoing human rights atrocities in Jammu and Kashmir. He further stressed the importance of raising the issue of Kashmir across Europe and UK whilst supporting the diaspora leadership who represent the sentiments of the people of Kashmir. He stressed upon the diaspora leaders to strongly raise this at UN level with various United Nations Human Rights Council Mandates and other international fora.

Asiya Andrabi (Chairperson Daughters of the Nation), detailed the case of Asifa and how the Indian government attempted to cover up the crime whilst the BJP prevented further investigations. She described this pathetic. But hoped that the diaspora leadership will raise her atrocity at every level, be it United Nations, European Union, Commonwealth or Organisation of Islamic Cooperation.

Zamrooda Habib (Chairperson Jammu Kashmir Women’s Movement), lamented India’s lack of humanity toward young Asifa, in particular the community of lawyers and political party workers who made attempts to sabotage the investigation against the perpetrators of this heinous crime and condemned those who took out processions unashamedly ‘celebrating’ the rapist child murderers.

Councillor Riaz Bhat of Luton pledged his continued support towards the Kashmir cause including promotion and protection of Kashmiris Human Rights.

Councillor Mahboob H Bhatti of High Wycombe was distressed by the gruesome tragedy of Asifa Bano and assured that he would leave no stone unturned to impress upon the MPs and MEPs of High Wycombe to raise this tragedy at all relevant forums.

Councillor Wasim Zaffar from Birmingham was outspoken about the gross human rights violations of the Indian military and para-mliltary forces upon Kashmiris in Jammu and Kashmir. He referred to the disproportionate use of force, in particular pellet guns.

Councillor Raja Salim found the Indian intrangency beyond one’s imagination and hoped that the international community, in particular the Commonwealth, would impress upon Narendra Modi to engage in dialogue in the hope to restore peace in that region and the fulfilment of the promised plebiscite to the people of Jammu and Kashmir.

The MPs who were expected to join the Roadside Roundtable expressed their inability on account of the debate on the Syrian situation in the House of Commons, in which the Prime Minister Theresa May was present. However, all the MPs pledged their continued support and solidarity for and with the Kashmiri people.

All the speakers deplored Asifa’s gruesome gang-rape and murder, and the resolution of the Kashmir issue in order to establish peace and security in South Asia.

Professor Nazir A. Shawl concluded the Roundtable with a vote of thanks.