“Siege is there! Who knows how long? India has taken extreme position and that is Hindutva position!”

Geneva 12th September 2019: Concurrent with the 42nd Session of the United Nations Human Rights Council (HRC), a Side Event was organised at the Palais des Nations titled “Kashmir Under Siege”, at which Makhdoom Shah Mahmood Quereshi, Foreign Minister of Pakistan, was the guest speaker.

Other panellists included Phil Bennion – Member of the European Parliament (MEP) & Member on the Committee of Foreign Affairs (AFET), Ms Victoria Schofield – Author and Historian; her main area of research has been the conflict of Jammu & Kashmir, Abdelwahab Hani – Member of the UN Committee against Torture; Founder & Honorary President of Al-Majd Foundation for Strategic studies; and Consultant for the Association for Prevention of Torture (APT), and Frank SchwaIba-Hoth – Founder Member of German Greens and Former MEP.

The event was moderated by Barrister A Majid Tramboo.

Introducing the theme (Kashmir under Siege), Barrister Tramboo characterised the nature of present India describing it as an epicentre of Racism under which every descending group or religious minority is being terrorised in order to appease the conscience of raga of Hindutva. He further stated that Kashmir is under 24 hour curfew for the last six weeks, and that independent international media report gross physical human rights abuses being perpetrated on peace loving Kashmiris by the Indian armed forces.

Delivering the keynote speech, Makhdoom Shah Mahmood Quereshi highlighted that the unilateral unlawful action taken by India on 5th August 2019 has been unanimously rejected. He particularised there being three stakeholders on the Kashmir conflict, two of them have out rightly rejected the Indian move namely the Government of Pakistan and the people of Jammu & Kashmir and the third party that is India is divided, bearing in mind that there are sixteen petitions before the Supreme Court of India, challenging the government of India’s unlawful act. The Foreign Minister remarked that the entire Kashmiri leadership is detained including those who have been their partners in the past. “Siege is there! Who knows how long? India has taken extreme position and that is Hindutva Position!”, the Foreign Minister added. He further elaborated that the government of Pakistan’s position is crystal clear in terms, if India takes one step towards peace and resolution of Kashmir, Pakistan is prepared to take two steps.

MEP Phil Bennion, in his intervention, stated that the Hindutva government of India headed by Narendra Modi has trampled all the basic rights of people and that his actions in Jammu & Kashmir are reprehensible. He demanded that the lockdown and curfew in Kashmir should be terminated immediately and all the fundamental rights of the people, imprisoned in a wider jail, must be restored.

Ms Victoria Schofield narrated one of her Kashmiri friend’s message to describe the present situation in Kashmir “simply incredible” and that in the name of Hindutva mantra attempts are being made to establish a supremacist agenda. She laid emphasis on dialogue and upholding the pledges made to the Kashmiri people.

Frank SchwaIba-Hoth stressed on the importance of European Union and the role that can be played by the European Parliament in upholding human rights of Kashmiri people and progressing towards the acceptable solution. He declared that the parliamentary groups are in consultative process to bring about urgency resolution on the current lockdown of Kashmir.

Professor Nazir A Shawl remarked that India envisioned by Gandhi stands transformed and taken over by the Inherits of Nathu Ram Godse who assassinated Gandhi. Professor Shawl implored upon the International community to recognise the urgency of addressing the catastrophic situation in the occupied territory where India is planning a demographic re-engineering and westbanknisation.

Abdelwahab Hani referred to the Convention of Torture that India has not ratified. He emphasized that the absence of ratification in no way makes a country immune in its practices and ramifications on torture and India is no exception.

Following the above event, the panellists and OKC delegation had an in-camera meeting with the Foreign Minister. 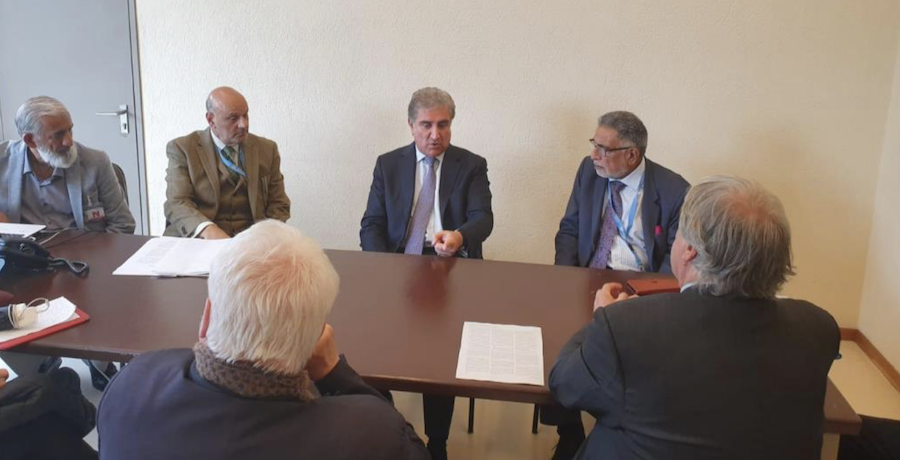 Prior to the 42nd Session of the HRC, OKC delegation (Barrister Tramboo and Prof Shawl) had a brief meeting with United Nations High Commissioner for Human Rights Madam Michelle Bachelet Jeria. On 4th September 2019, at which the delegation emphasised upon her urgent intervention relating to the lockdown of Kashmir with the rest of the world and to address the severe human rights violations against Kashmiri people. In her address, on the opening of 42nd session of the HRC, the High Commissioner categorically stated –“In relation to Kashmir, my office continues to receive reports on the human rights situation on both sides of the line of control. I am deeply concerned about the impact of recent actions by the Government of India on the human rights of Kashmiris, including restrictions on internet communications and peaceful assembly, and the detention of local political leaders and activists. While I continue to urge the Governments of India and Pakistan to ensure that human rights are respected and protected, I have appealed particularly to India to ease the current lockdowns or curfews; to ensure people’s access to basic services; and that all due process rights are respected for those who have been detained. It is important that the people of Kashmir are consulted and engaged in any decision-making processes that have an impact on their future”.