London – 9 May 2019: The Kashmiri diaspora leadership headed by Barrister A Majid Tramboo held a press conference at London highlighting the urgency that the international community should forestall India’s plan to demographically change the population ratio of the Jammu & Kashmir (J&K) to a Hindu majority state.

The state of India is currently holding its Lok Sabha (Lower House of the Indian Parliament) elections. Bhartiya Janata Party (BJP) which is ruling India has made it an election pledge to change the demography of the state of Jammu & Kashmir (J&K) by abrogating Articles 35A & 370 of the Indian Constitution. These accord special status to J&K and strictly prohibit any non-state subject to buy land there.

Barrister Tramboo, through power point demonstration, briefed the media that BJP is running both electronic and print campaign (including hoardings) throughout India in terms – “Your vote for BJP will bring you land in Kashmir.” This is the bedrock of the BJP manifesto.

He pin-pointed the various BJP’s poster messages such as “A Fitting Response to Terrorism – Article 370 & 35A to be Annulled”, “Hindu Ahead Campaign – Land in Kashmir”, “BJP’s NO TO ART 35A”, “Easy Way to Delete Article 370 and 35A – Simply Cut them with Scissors”, “Campaign to Abolish Article 370 – for a safer India, United India, Happier India” and “Kashmir Free from Freedom Struggle”. “All this is Shocking”, Barrister Tramboo declared.

Barrister Tramboo revealed that during the five-year rule of BJP from New Delhi, the human rights situation in IOK has fallen below the basic humanity norms. He presented the following figures of atrocities during the above period for media’s attention: 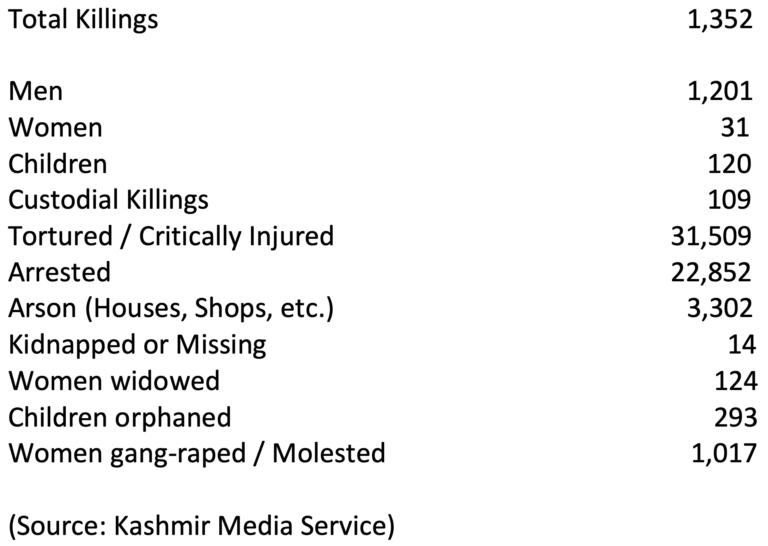 In conclusion Barrister Tramboo remarked that the state of Jammu & Kashmir is the UN recognised disputed territory; the people of J&K have to exercise their inalienable right to self-determination to decide their political future; India has persistently denied this right; now the Indian game plan for demographic change.

He asked the international community together with all the stakeholders (including USA, UK, China, Russia and France) particularly the government of Pakistan and inter-governmental organisations such as the United Nations, European Union, Commonwealth, African Union and the Organisation of Islamic Cooperation must intervene before it is too late!

Mr Zubair Awan, Chairman Kashmir Youth Assembly, in his opening remarks stated that the intended “demographic change” in IOK is serious therefore, needs to be addressed on urgent basis. He compared this with Palestine/Israel situation. He further hoped that the British politicians, from all sides, will stand with Kashmiris for their just cause.

Mr Yasir Ahmed, Secretary General Kashmir Youth Assembly appealed the media to play their role to give proper space to this nefarious design of BJP ensuring proper coverage to stop India from this heinous act.