The IMC began with a video presentation titled “Kashmir – Media Missing EXPOSURE”. It reflected the existing impasse in understanding the seriousness of the Kashmir issue and the media neglect.

The conference was spread over four panel discussions with an opening and closing plenaries.

The opening plenary was chaired by Barrister A. Majid Tramboo and in his opening remarks he stressed the need upon the conference panelists and participants to highlight the elements that would bring the Kashmir issue including the gross human rights atrocities being perpetrated there to huge limelight by the international media (including the western media). He introduced the slogan of the conference – Self Determination is Democracy – Democracy is Self Determination.

The guest speaker in the opening plenary was Chris Leslie MP [Chairman, All Parties Parliamentarians Group on Kashmir (APPG), House of Commons, the British Parliament]. In his inaugural speech he declared that the APPG on Kashmir has decided to visit Srinagar and Muzaffarabad in the upcoming spring. He declared that day to day developments and human rights concerns will be monitored and reflected on the webpage of the APPG. He stressed for a unified focus by Kashmiri diaspora to highlight this left behind legacy. Media, he commented, has to play a vital role in transforming the mind constructs.

In his concluding remarks to the opening plenary, Prof Nazir A. Shawl articulated media to play a fair role in projecting the Kashmir conflict with specific reference to the ongoing human rights utter violations in the occupied territory of Jammu & Kashmir.

The theme discussed in the morning session was:

WHAT MECHANISM OUGHT TO BE UNDERTAKEN TO HIGHLIGHT UNDER REPORTED OR UNREPORTED CONFLICTS AROUND THE GLOBE WITH PARTICULAR REFERENCE TO JAMMU AND KASHMIR? 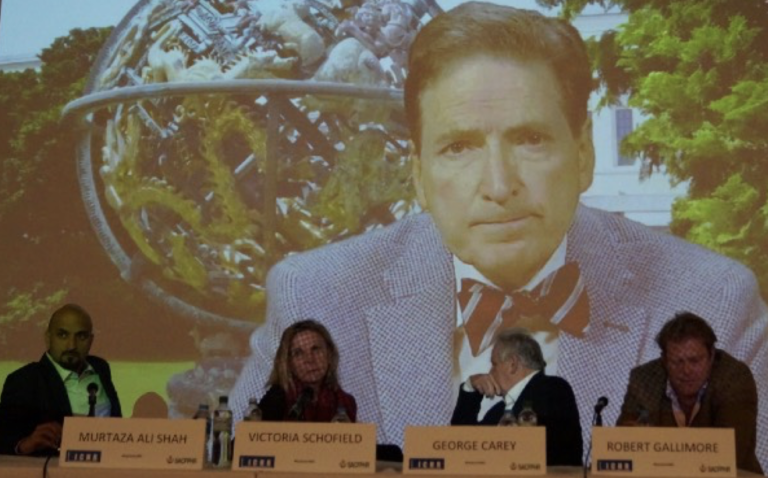 This session was chaired by Victoria Schofield (Author, Historian and Journalist) who in her opening statement said that vested interests play a role in media reporting; Kashmir may have become a complex issue but it is for media to create narratives; one must go to the ground which is fundamental to the distribution of genuine information; She followed the discussion by having an interactive dialogue with George Carey (Documentary Film Maker and a famous former BBC stalwart presenter) who said that access to conflict areas is the biggest problem and that makes it harder to verify citizen journalism; sharing his experience he believes that it is “bits and pieces” in conflict zones that makes news and that is what local media should explode, Robert Gallimore (Researcher, Documentary Film Maker and Journalist) emphasised three factors in media reporting; one, there has to be a clear villain and injustice, two, there is need for a tangible solution which should be clearly articulated and three, a simple and perpetual narrative, and Murtaza Ali Shah (Bureau chief – Jang and Geo group UK and Europe) stated that media has a role to give the correct narrative to the world; he stressed the need not to project the Kashmir conflict through the prism of Islamisation.

The IMC was addressed from Palais des Nations, Geneva by Dr Alfred De Zayas (United Nations Independent Expert on the Promotion of Democratic and Equitable International Order). He articulated that democracy is an expression of self- determination and that the media must report throughly and responsibly. It should not focus exclusively on politically correct or fashionable issues but must also address neglected topics such as Kashmir and others. He also pointed out that the United Nations has a role to play here, offering advisory services and technical assistance. However, he ultimately called on the United Nations General Assembly to be the the first to call for referenda and self-determination in Kashmir.

MEDIA DRIVES POLICY MAKERS TO HAVE A POLICY POSITION; THIS FOLLOWS THAT WITHIN CONFLICT ZONES, SUCH AS JAMMU AND KASHMIR, MEDIA HAS POTENTIAL TO SUPPORT PEACE-BUILDING AND DISSUADE CONFLICT ACCELERATION AND THAT CAN HAVE A MAJOR IMPACT ON THE POLICY MAKERS OF STATES!

Lord Duncan in his opening remarks elaborated on his human rights work and emphasised that media, as a matter of course, should report human rights violations where ever they occur, Ianina Cozari (Brussels based Russian Journalist) said that there should be access to media in conflict zones and report situations as those happen objectively, Alaa Bayoumi (News Editor – Al Jazeera, UK) declared that media should cover conflicts particularly where the struggle is for democracy so that, at the end of the day, democracy is not undermined, Tahir Aziz (South Asia Programme Director, Conciliation Resources) highlighted that it is paramount for Kashmiri people to demonstrate conciliatory approaches to get stakeholders involved in building peace and resolution and this will get media attention as simply media reporting is not enough to get the problem solved as it is evident from other heavily reported conflicts, he insisted that Kashmiri activists should get local stories from local people with their perspectives which could provide a different input in the media cycle and Kelvin Hopkins MP, (House of Commons, British Parliament) re-iterated his support to the Kashmir cause and stated that media may not interfere in political decision making but it can objectively shape the desired direction towards resolution of the conflict and as Kashmiris struggle is for democracy they deserve media support.

HOW CAN INTERNATIONAL MEDIA ENGAGE NATIONAL MEDIA IN CONFLICT ZONES WHICH IS CRUCIAL TO BUILD PUBLIC OPINION FOR A CONSTRUCTIVE DIALOGUE LEADING TO GENUINE EFFORTS TO BUILD BRIDGES FOR CONFLICT RESOLUTIONS? 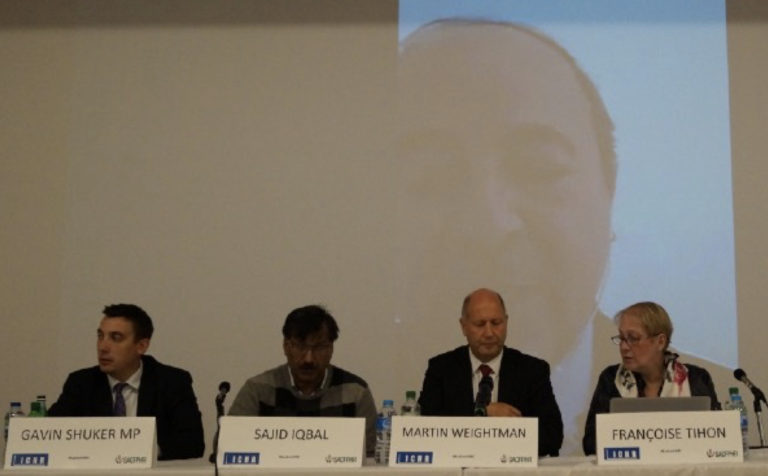 Martin Weightman opened the discussion pointing out that religious leaders in conflict areas should separate themselves from political positions as it is often seen that religion is used as justification for political goals, he further emphasised that journalists vital role is to focus on conflicts and report on them impartially and independently. The panelists included Francoise Tihon, (Journalist Global Radio Network, Brusells) who has extensively covered Kosovo conflict and speaking from her experience expressed the view that media exposure in conflict areas is directly linked with situations as they develop in those places, Sajid Iqbal (BBC – Community Affairs Specialist) considered that local media has bigger role to play and reporting should be throughly professional and unbiased and which international media could see as genuine and feel confident to report, Abdel Wahab Hani (United Nations – Committee Against Torture) highlighted the importance of the United Nations instruments in establishing non-violent and peaceful world, he considered it media responsibility to report torture where ever it takes place and Gavin Shuker MP (House of Commons and a member APPG, British Parliament) unambiguously stated that the will of the people needs to be ascertained to move forward and that media can be a great resource to promote peoples’ aspiration in an objective manner. He stressed that the way forward to resolve the Kashmir conflict is through people’s will and this is what media ought to stress.

The afternoon panel was chaired by Sabia Akram Hussain (Deputy Leader and Cabinet Member of Social and Health Care, Slough). This theme discussed:

AS A POLICY AGENDA SETTING OPERATOR, AN IMPEDIMENT TO EXECUTE STATE ORIENTED VIOLENCE AND WITH A POWER TO ACCELERATE A POLICY OF PRO- PEOPLE DECISION AND RECONCILIATION, INDEPENDENT MEDIA HAS A CRITICAL ROLE IN CONFLICT ZONES!

In her opening statement she stated that the Kashmir situation is a burning issue which deserves the media attention, international media, she believed, should report on Kashmir fairly, Betty Cleeren (Freelance Journalist from Brussels) remembered her visit to Kashmir in 2005 and seeing it as a human tragedy which certainly needs media attention; Kashmiri people, she declared, deserve better and freedom from occupation, she deplored under reporting of the Kashmir tragedy as it ought to be within media’s medium, Ranjit Singh Sarai (Secretary Parliamentarians for Self-Determination) deplored Indian media fake reporting on various conflicts within India, he believes that they are doing disservice to their patriotic ambitions; he implored upon international media, for this very reason, to expose Indian media for fake reporting and cover the conflicts there in their true perspectives and Leon Kaulahau Siu (Human Rights Defender and Spokesperson for the Hawaiian Kingdom) shared his media experience in projecting the Hawaii situation; he stressed that news should not be fake which may ruin the cause and that there should be positivity in the approaches and could persuade the concerned media to be on your side.

The closing plenary was chaired by Prof Nazir A Shawl and vote of thanks was moved by Barrister Tramboo.

In this plenary the guest speaker was Rita Payne (President of the Commonwealth Journalists Association). She spoke about the conflict dynamics of the lingering Kashmir conflict. She referred to conflicting narratives within the conflict and asked journalists to discover the facts objectively. She stressed on the impartiality of journalists and to deliver facts over opinion.

The resume of the whole day deliberations was summarised excellently by Victoria Schofield adding that Kashmir may be complex but media interest is crucial as there are human sufferings, being a nuclear flash point and economic considerations as both the countries (India and Pakistan) spend billions on their armies.

Barrister Tramboo in his vote of thanks, thanked the panelists and participants for their interactive participation in the IMC. He cited history in driving the analogy that people fighting for freedom and for their right of self determination cannot be dubbed as terrorists. If Bhagat Singh and Subash Chander Bose are freedom fighters then labelling a leading Kashmiri freedom fighter as a global terrorist is not justifiable.

He declared the formation of IMC Working Group which shall have renowned journalists, academics and jurists as its members to take the deliberations of the IMC further.

Prof Shawl in his concluding remarks said that the learned panelists have expressed their valuable suggestions and discussed the dynamics of Kashmir conflict in relation to other conflicts of the world. In order to understand the complexities in the process of resolution media has a major role. He closed the conference with the slogan Self-Determination is Democracy – Democracy is Self-Determination!