Speaking on the historic occasion, Barrister A Majid Tramboo (IHRAAM) expressed the need to show solidarity with the people of Kashmir at every level and location available for the diaspora to remind authorities in the power corridors about the deteriorating plight of Kashmiris in Indian Held Kashmir. He noted that Palais Wilson, the location of the event, was the building in which the Office of United Nations High Commissioner for Human Rights (OHCHR) was based, the same office that produced the crucial UN Kashmir Report (the Report) published in June 2018. He stated that todays’ presence is to emphasise to OHCHR whereas numerous recommendations have been made in the Report to be acted upon by India immediately however, India has ignored them altogether. The report recognised the urgency of the situation in Kashmir and directed India to end torture, extra judicial killings, sexual violence, use of excessive force including pellet short guns, repeal all the draconian laws, release political prisoners and prisoners of conscience and hold an independent and impartial investigation on mass and unnamed graves as passed by the European Parliament 12 years ago.

Barrister Tramboo reiterated the need for the follow up report to recognise India’s callous demeanour towards the report and the continued and escalated violence in Indian Held Kashmir since the publication of the Report. He added that the Indian Government has detained and jailed pro freedom leaders (very recently Mohammed Yasin Malik of Jammu Kashmir Liberation Front – JKLF) and raised concern of their safety as well as other prisoners who have been languishing in various Indian jails for many years including Farooq Ahmed Dar of JKLF and Shabir Shah of Jammu and Kashmir Democratic Freedom Party.

Barrister Tramboo declared that non-governmental organisations community will organise and submit a “petition’ to the President of Human Rights Council and its member states to hold a ‘panel discussion’ on the Report at its earliest bearing in mind that the Human Rights situation in Indian Held Kashmir has massively deteriorated.

Professor Nazir A Shawl (SACFPHR) appreciated the gathering as an expression of sentiments about the Report. He said all Kashmiris welcome the facts portrayed in the Report reflecting the gross human rights violations committed by India, but more importantly it is a reflection of international endorsement of the fact that the Indian state is practicing state terrorism in Kashmir. He highlighted that the similar perception have been endorsed by the Organisation of Islamic Conference (OIC) in its recent resolution, and hoped that all other inter-governmental organisations will come forward and ensure the implementation of the recommendations made in the Report. One of the heartening facts of the Report is that the Kashmiris right to self-determination, as enshrined by international law, has been reasserted, which has been welcomed by the suffering people of Kashmir. He added the UN Secretary General’s endorsement of the Report calling it “the voice of the UN”, and hoped that every country in the world will echo those sentiments that believe in democratic rights of peoples. He hoped that the international community would address the long-standing issue of the people of Kashmir, and highlighted the need for the wider world to raise their voice as freedom of expression in Kashmir has been curtailed and peaceful dissent has been met with brute force and illegal detentions. Prof Shawl concluded by saying that Kashmiris are being terrorised by a so-called democratic state who have used rape as a weapon of war and banned socio-religious organisations and leaders. 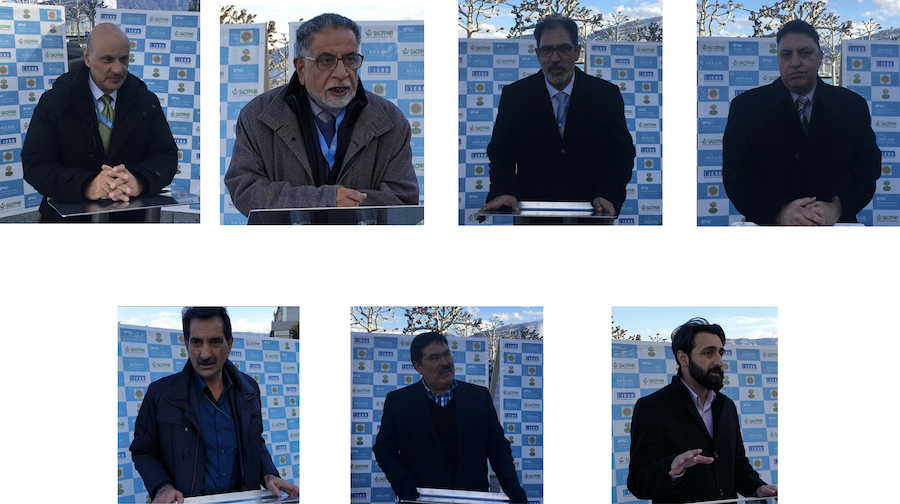 Mr Altaf Wani of Kashmir Institute of International Affairs (KIIR) expressed his dismay at India’s reaction to the Report and instead of accepting the recommendations to promote and protect Kashmiris human rights Indian repression has increased in Kashmir. The intensified state terrorism saw 2018 as the deadliest year in the last decade for Kashmiris, which should alarm OHCHR. Mr Wani hoped that the upcoming follow up report by OHCHR will have stronger recommendations. He echoed Barrister Tramboo’s call for a panel discussion in Human Rights Council on the Report that may pave a way for the formation of commission of enquiry to investigate ongoing human rights violations in Kashmir. He concluded by condemning the arrests of political and religious leaders in Kashmir including the ban on the socio-religious organisation Jamaat-e-Islami and hoped that UN would finally implement the UN Security Council Resolutions.

Sardar Mahmood Iqbal, a leading community leader of Belgium, thanked the organisers for holding an iconic event in front of the OHCHR that published the Report. He expressed the Kashmiri diaspora hope that the recommendations be implemented or at least the world community to insist on India to address the content of the Report. He condemned India to have terrorised Kashmiris further, in Kashmir and in mainland India. He appealed to the wider world to push India to resolve the issue of Kashmir according to the UN resolutions, or risk nuclear war, a likely scenario given recent events between Pakistan and India.

Mr Parvez Shah of All Parties Hurriyat Conference (APHC) was grateful for the unique opportunity to speak in front of the Palais Wilson and applauded efforts made by the diaspora to represent the sentiments of the people of Indian Occupied Kashmir. He said that it took seven decades of gross human rights violations to trigger OHCHR to submit its report to UN Human Rights Council, but since the publication, more than 600 people have been killed in Kashmir attesting to India’s flagrant disregard for international law and human rights law. He added that India has choked the right to freedom of expression thus forcing the youth towards militant resistance against the Indian occupation. Mr Shah reminded the Kashmiri diaspora that it has become their massive responsibility to work more effectively on the global front to force a resolution acceptable to the people of Kashmir.

Ambassador Ronald Barnes of IPNC stated that he is proud to support the Kashmir cause for justice on behalf of his organisation and the efforts made towards advocating Kashmiris right to self- determination.

Mr Muzzammil Ayyub Thakur of Kashmir Youth Assembly (KYA) made concluding remarks by thanking the presence of those who continue to support the Kashmir cause for freedom, and hoped that the presence of the audience in front of OHCHR would reflect the seriousness of the ongoing crisis in Kashmir, but also of the commitment the diaspora has towards lobbying for a peaceful resolution of the Kashmir issue according to the United Nations Security Council Resolutions.

All the participants endorsed the NGOs community ‘petition’ asking Human Rights Council to conduct a panel discussion on the report as soon as practicable.