Geneva: 5 October 2020 – Organisation of Kashmir Coalition (OKC) under the umbrella of its partner International Human Rights Association of American Minorities (IHRAAM) held a virtual conference on the side lines of the 45thSession of the United Nations Human Rights Council (HRC) which is being held at Palais des Nations at Geneva. 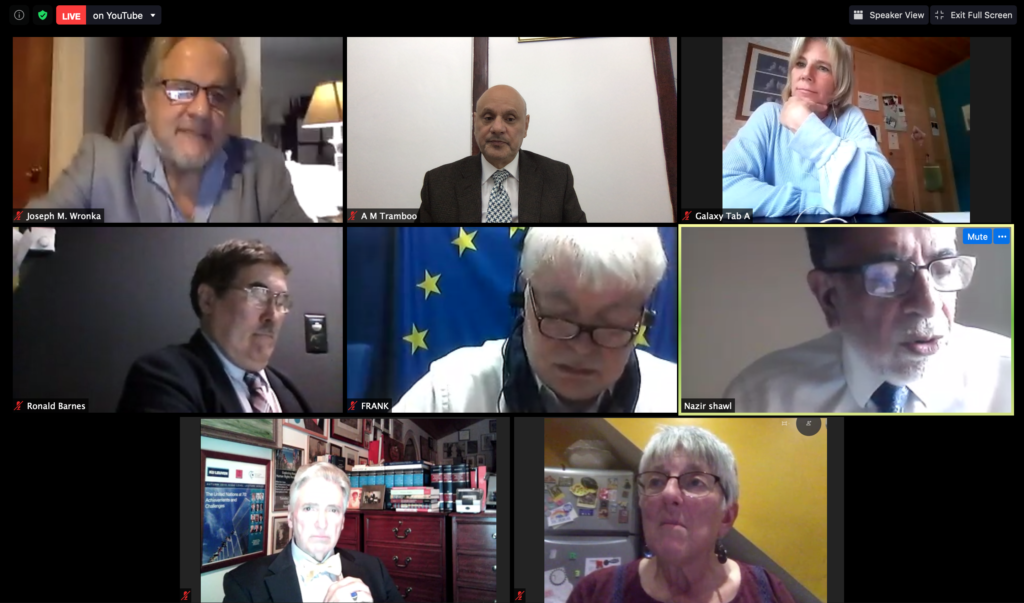 The panellists included Professor Alfred de Zayas (Geneva School of Diplomacy and former Independent Expert on the Promotion of a Democratic and Equitable International Order), Professor Nazir A Shawl (Chairman, South Asia Centre for Peace and Human Rights and the Leadership of OKC), Madam Daniela Donges (Scales for Justice out of Geneva), Ambassador Ronald Barnes (Chair of Indigenous Peoples and Nations Coalition; Head of Mission in Geneva for the Alaska Decolonisation Movement), Professor Joseph Wronka (Professor of Social Work, Springfield College, Representative to the UN in New York for the International Association of Schools of Social Work (IASSW)), Former MEP Frank Schwalba-Hoth (Co-Founder of the German Green Party and Former Member of the European Parliament (MEP)) and former MEP Julie Ward. The conference was moderated by Barrister A Majid Tramboo (IHRAAM permanent representative to the United Nations at Geneva and the Leadership of OKC) under the theme – SELF-DETERMINATION, CONFLICTS AND THE GENEVA CONVENTIONS.

Opening the conference Professor Alfred de Zayas provided a legal analysis of the theme in that he submitted a comprehensive report on the issue of self-determination with pragmatic recommendations to the United Nations General Assembly (GA). He referred to people’s aspirations for self-determination which are frustrated including that of the Kingdom of Hawaii and Alaska and asked to annul the GA resolution 1469. Referring to the conflict of Jammu & Kashmir, Professor Alfred de Zayas recalled that there are specific Security Council resolutions on the issue including the very recent reports on the gross violations of human rights by the Office of the High Commissioner for Human Rights together with reports from various special rapporteurs; all these reports relate to Kashmiris right to self-determination. He emphasised that there are various UN instruments on recognising the peoples rights to self-determination and this directly linked with the concert of dignity, cultural and social identity. Professor Alfred de Zayas expressed that there are solid legal basis on this issue and that self determination is not to go away and its in the world peace that the High Commissioner of Human Rights, Human Rights Council, the General Assembly and the Secretary General of the United Nation give central place to self determination as a conflict prevent strategy and it has be recognised that implementation of self determination is as vital as right to life.

Professor Shawl succinctly set the scene for the Kashmiris right to self-determination. He referred to the global arena which reveals the painful reality of self-determination related conflicts with echoes of pain and agony, denial and deprivation, social injustices, draconian laws, military lock downs and overriding undemocratic structures. Referring to Indian Occupied of Jammu & Kashmir (IOJ&K), Professor Shawl considered that the military ratio exceeded the presence of civilians in IOJ&K. He further identified that such ratio is a consequence of the Kashmiri’s plight to self-determination as under the United Nations resolutions.  He added: “The people of Kashmir reject the Indian military occupation and that the present state of affairs is not brought about by any third party but for the oppressive rule administered by India. The state oriented terror in IOJ&K has intensified since Modi lead government is installed at New Delhi with utterly militarised and muscular policies and no adherence to the Geneva Convention. On 5 August 2019 the Modi government fractured the state of Jammu & Kashmir breaking into so called two union territories to absorb IOJ&K into India and bring about the demographic change; this is in contravention of international law and the specific UN resolutions on Kashmir.”

Madam Donges highlighted the Palestinian situation providing the graphics as to how the Geneva Conventions are brazenly violated in the occupied Palestine. She referred to massive illegal settlements on Palestinian lands by Israel in stark contravention of article 53, 670,000 settlers already in occupation; in violation of article 53, the Palestinians houses and properties are demolished on the pretext of terrorism and/or unlawful built and this causes enormous pain and suffering to the affected families; article 147 of the Fourth Geneva Convention is crushed on routine basis in the occupied territories; killings, torture, inhuman and degrading treatment or punishment as a matter practice demonstrates that Palestinian lives are cheap; article 76 is abused in the sense that prisoners invariably are imprisoned in mainland Israel thereby preventing their families to visit them as the family members rarely get permits to travel to the Israeli territory.

Ambassador Barnes analysed the self-determination issue of Alaska and Hawaii stating that Alaska and Hawaii are recognized in 1946 under Article 73 of the United Nations Charter. The United Nations granted the gift of apartheid of Alaska to the United States of America (USA) without properly examining or applying the procedures of decolonization in 1959.  Under the premise the Tee-Hit-Ton v Untied States of America (1955) and the Johnson v McIntosh (1823) the United States Supreme Court held that the land is for the settlement for the white race considering that the superior genius of Europe might claim an ascendency over the Indigenous Peoples of Alaska in violation of General Assembly resolutions 644 and 1328 calling for the abrogation of racial discrimination in law and policy. The Alfred de Zayas Memo declared this as apartheid and a crime against humanity. Ambassador Barnes further stated that the Geneva Conventions are the premise of decolonization principles and certainly do apply in Alaska and other cases as tribal governing authority is recognized.  He remarked that the United States of America Working Group of the Universal Periodic Review examination of its human rights record will convene on 9thNovember of 2020 in Geneva and insisted that Alaska and Hawaii want General Assembly resolution 1469 to be annulled.

Professor Joseph Wronka in his presentation recalled the words of Supreme Court Justice Louis Brandeis: “The greatest dangers to liberty lurk in insidious encroachment of men of zeal, well meaning, but without understanding,” western social policies can be antithetical to Indigenous values, such as a subsistence life style and the right to self-determination, which in Mohawk means “living nicely together”. He further commented that according to Indigenous scholar Natalie Cisneros, self-determination  “can be best realized through Native centered practices….  free from paternalistic intervention of settler governments.”  Professor Wronka, referring to Gandhi, stated when asked what he thought about western civilization, Gandhi replied: “a good idea.” He contended that the Spirit of Crazy Horse, named after that great Indigenous spiritual leader, can serve as a basis for such a “new” civilization:  “Peace, humility, and everlasting love.” In conclusion Professor Wronka remarked whereas the UN Declaration on the Rights of Indigenous Peoples is a major step forward nonetheless, we need to have robust debates on the possibility of a “stronger” International Convention on the Right to Self-Determination.

Former MEP Schwalba-Hoth recalled that 17 years ago serious work on the Kashmir issue commenced within the European Union (EU) in particular the European Parliament (EP) through Kashmir Centre.EU for Kashmiris self-determination and for the promotion and protection of their human rights and that work is continuing. He emphasised that EU is guided by its core values i.e. self-determination and human rights for all and this why the Kashmir conflict receives specific attention in the EP. Mr Schwalba-Hoth clarified that in recent times the EP work might have been slowed down because of the Covid-19 pandemic including Kashmir but this will certainly accelerate once the pandemic controlled. He further elaborated that although there has been Brexit (previously British former MEPs would take the lead on Kashmir) nonetheless, All Parties Group on Kashmir (APGK) has been put in place under the leadership of Madam MEP Manuela Rippa and EP shall continue to be a partner of Kashmiris to achieve their right to self-determination and human rights.

Former Madam MEP Julie Ward in her good will message to the conference is encouraged to see that specific threats to Kashmiris are highlighted time and again through inter active dialogue such as this. She expressed her concern that the right wing governments use the Covid-19 pandemic to brush the crucial issues such as self-determination under the carpet but it is an important issue. Madam Ward particularly expressed her anxiety on two crucial matters; firstly, she described Kashmir incredibly rich in natural resources but those are being polluted through the disposal of substance waste such as nuclear and chemical wastes that leads to environmental pollution there effecting the people now and certainly in the future; and secondly, the gender aspect bearing in mind that women and children are prime targets in any conflict situation; “I stand for lives of my sisters in Kashmir and I will not give up until Kashmiri women are not freed”, she declared.

Barrister Tramboo, in moderating the conference, raised the issues such as that the UN must organise an international conference on peoples right to self-determination and to re-introduce it into agenda of the HRC. He appealed all the like minded states and the NGO fraternity to put their heads together on this utmost issue and embark on the path to achieve it. He declared that the present power regime lead by Modi at New Delhi is a fascist regime and unless it is removed the world peace is in peril.

The conference was live streamed and can be watched on OKC’s YouTube Channel called okcworld.